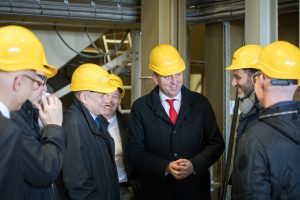 After the visit, Commissioner Andriukaitis said: ‘I am very satisfied with the visit. It is always useful to see how things are done on the ground. The notion of ‘circular economy’ becomes very tangible. Indeed, thanks to the top technology you have it in action – a broken biscuit is transformed into safe feed for animals. This is one way of how circular economy works and how food waste is prevented‘.

For EFFPA the visit was another milestone in its existence as a sector-representing organisation. EFFPA President Paul Featherstone: “The possibility to showcase the role of former foodstuff processing in the circular economy to European Commissioner Andriukaitis further establishes us as part of safe and sustainable feed production. At the same time we have clearly demonstrated former foodstuff processing is not in competition with food banks”.

The visit allowed to illustrate former foodstuff processing is an intrinsic part of the food-to-feed chain. EFFPA currently awaits the outcome of the ‘trilogue’ negotiations on the Circular Economy Package which is expected to confirm that former foodstuffs placed on the market as feed are clearly exempted from the Waste Framework Directive.