On 29 March 2017, EFFPA (the European Former Foodstuff Processors Association) organised its 1st stakeholder event in Brussels since its foundation in January 2014. The event, attended by approximately 70 people, served as an introduction to the former foodstuff[1] processing value chain as well as a platform to discuss the way forward for the applicable regulatory framework. The programme featured speakers from the food & feed sector, regulatory experts and a food safety assurance scheme representative. The valuable sustainability contribution of former foodstuff processing to the EU circular economy and the prevention of food waste were highlighted, while also stressing the importance of maintaining feed safety at all costs. Future innovation in processing technology & sourcing capacities, more efficient safety assurance scheme auditing procedures a 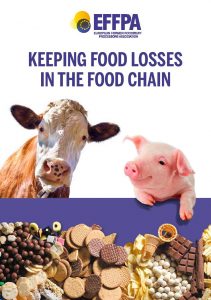 nd a streamlining of the regulatory interface between food and feed production were mentioned as elements that could further stimulate the processing of former foodstuffs into feed for food-producing animals.

EFFPA President Paul Featherstone: “The event provided an excellent podium to present our business activity to a wide audience. I hope it will stimulate the food industry’s conviction that having their former foodstuffs transformed into animal feed can be part of a safe, sustainable business strategy that contributes to food waste prevention”.

Former foodstuff processors transform foodstuffs no longer suitable for human consumption into high-quality feed ingredients. At the event, EFFPA also announced the publication of a brochure called “Keeping food losses in the food chain”, which aims to help with accurately explaining what former foodstuffs are as well as tackle potential misconceptions.

[1] Regulation (EU) No 68/2013 – Catalogue of Feed Materials: ‘former foodstuffs’ means foodstuffs, other than catering reflux, which were manufactured for human consumption in full compliance with the EU food law but which are no longer intended for human consumption for practical or logistical reasons or due to problems of manufacturing or packaging defects or other defects and which do not present any health risks when used as feed