At the Food Waste Conference of 15 October 2015 at the EXPO Milano, organised by the European Commission, Commissioner Vytenis Andriukaitis clearly underlined the importance of former foodstuff processors and the need to avoid waste classification of the animal feed resources used.

In his speech EXPO Milano, Andriukaitis made the following statement: 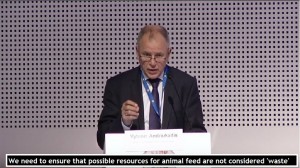 We are seeking to clarify and – wherever possible – lift any barriers which prevent the safe use and re-use of food in the food and feed chains.  Together with regulatory authorities in the Member States, we must support food and feed business operators who seek to optimise the safe use of resources in the food and feed chain. I refer here, for instance, to the use of former foodstuffs which are safe to eat but can no longer be marketed for human consumption, as a possible resource for animal feed. We need to ensure that such valorisation is not considered as “waste” and also ensure proper traceability of such food resources, so they can be safely redirected to those in need – distributed to charities and food banks and when not possible re-utilised in feed production. Of course we cannot and will not compromise on safety. Any developments in this area can only be considered viable if they do not present risks either for human or animal health.

EFFPA welcomes this very clear public statement at EXPO Milano as it directly responds to EFFPA’s call for more clarification on the non-waste legal status of former foodstuffs. Currently EFFPA members often find themselves exposed to interpretations of environmental authorities, even though only food safety regulations should apply. EFFPA was also pleased to hear the Commission confirm that proposals to reduce food waste will be included in the circular economy package, of which the Communication should be published on 2 December 2015.