On 22 September 2015, at its 3rd General Assembly, EFFPA re-elected its President Paul Featherstone (UKFFPA) for another two years. Also the Vice-President, Kees van Gorp (VIDO), and the Treasurer, Sigrid Pauwelyn (TROTEC), will continue their roles as EFFPA representatives.

The EFFPA Board members considered it of great importance that the representatives who helped to give EFFPA a flying start to continue their work. EFFP 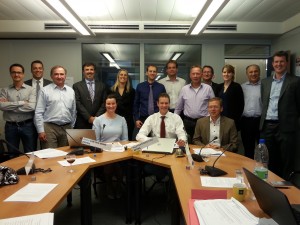 A President Paul Featherstone: “I am honoured to receive the continued support from my respected colleagues in the sector for another two years. We have achieved a lot already in the past two years and I am committed to help the sector obtain more recognition for its role in the food and feed chain in the years to come, most notably with the EU proposals expected in the light of the Circular Economy”.

The European Commission is expected to publish a Communication on the Circular Economy by the end of 2015, which is likely to contain a chapter on food waste. EFFPA has recommended the Commission to take this opportunity to clarify the legal status of former foodstuffs as by-products as opposed to waste. The legislative proposals on the Circular Economy are expected around spring 2016.