On 16 February EFFPA Board member Sigrid Pauwelyn participated in a breakout session on preventing and reducing food waste at the 2016 Circular Economy Conference in Brussels. She presented the solution animal feed can offer through former foodstuff processing, thereby keeping food losses in the food chain.

Pauwelyn explained the typical reasons why former foodstuffs result from industrial food manufacturing and gave explicit examples of food waste which cannot be used in animal feed (catering/household waste, meat products). She stressed the importance of applying the principles of the food and drink material hierarchy throughout the supply chain, noting that indeed the primary destination of food should always be humans, but the best alternative that comes afterwards is animal feed. Speaking from company experience, she explained a large retailer opted to valorise its former foodstuffs through animal feed rather than anaerobic digestion due to better LCA performance. 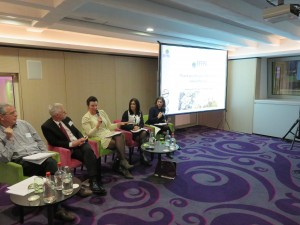 DG SANTE Head of Unit Alexandra Nikolakopoulou, in charge of food waste, highlighted the exclusion of animal feed as one of the EU measures that aims to facilitate the feed use of former foodstuffs in order to further reduce supply chain food waste at the 2016 Circular Economy Conference. Pauwelyn stressed this clarification in the Waste Framework Directive 2008/98/EC is indeed necessary: “The Commission proposal marks a clear dividing line between what should be considered a feed chain operation and what falls under waste management. Exclusion from the waste status would once and for all clarify the grey zone EFFPA members often find themselves in”.

Nikolakopoulou further stated the Commission will use the FUSIONS food waste quantification manual as the basis for the methodology to calculate food waste in the EU. She stated establishing reliable data on food waste is the key priority for the Commission. The added value of incorporating any kind of food waste hierarchy into legislation will be discussed in a secondary stage, most importantly in a EU platform on food waste aiming to bring together all relevant stakeholders which is set to be launched in the course of the coming year.